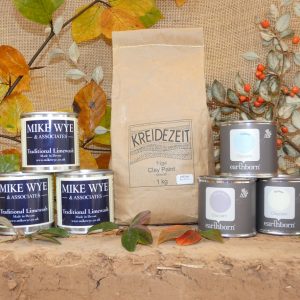 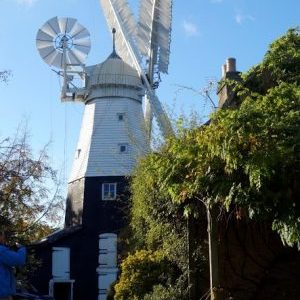 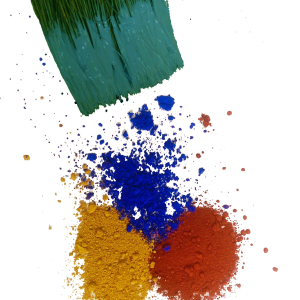 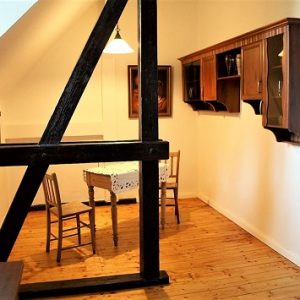 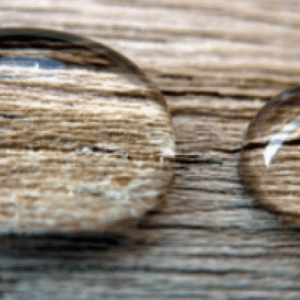 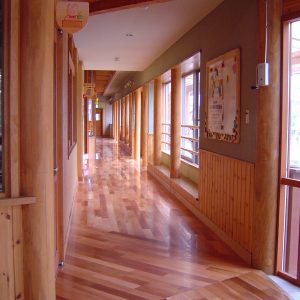 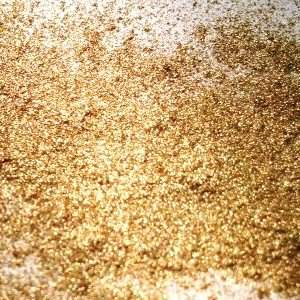 Many of us would like to use sympathetic, natural paint to decorate our homes. Unfortunately it’s common to find that previous occupiers have coated internal walls with acrylic paint or vinyl wallpaper. Worse still, external repairs are often carried out in cement and sealed with synthetic masonry paint. This produces a finish which looks good, but can trap moisture in walls causing damp problems in the longer term.

Some modern paints have evolved into a complex cocktail of synthetic chemicals. They can include preservatives, carcinogenic solvents and sometimes toxic metals. While these paints can be effective, their manufacture produces a mountain of waste and excessive atmospheric pollution. Worst of all they can be bad for your health – giving rise to irritations, migraines and allergies. This is despite the claims often made that they are ‘user-friendly’.

Happily, we are seeing a revival of conventional paint manufacture. Natural paint can look and behave like modern, synthetic counterparts but are flexible, breathable and pleasant to use. They are user-friendly and can be applied anywhere throughout the house and often on furniture too.

Silicate paints were first patented in Germany in the late 19th century. King Ludwig I wanted to copy Italian frescos but found that lime plaster couldn’t withstand the harsh climate. He asked his scientists to develop a paint that looked like lime, but was more durable.

Like limewash, silicate paint works by soaking into the underlying material. The silica binds chemically with the mineral substrate, forming an insoluble crystalline bond. This is likely to be a far more compatible treatment than painting walls with a surface film of synthetic masonry paint.

Apart from being very durable, silicate masonry paint is exceptionally vapour-permeable (breathable). It is also unaffected by UV light, resistant to acid rain, mould growth and fire. In regions where fire is a threat , such as earthquake zones, sodium silicate is sometimes sprayed onto wooden buildings as a cheap method of fireproofing.
You can also use silicate paint internally on areas where other paints might not work as well, such as damp internal stone walls or basements.

Clay paints are a luxurious, rich, natural paint which have an ultra-matt finish. With similar levels of vapour permeability to limewash they are also highly breathable paints.

Clay paints emit negative ions – higher ambient levels of negative ions are widely accepted as being beneficial to health and well-being. This leads to less static electricity build up, reducing airborne dust and allergens. Therefore resulting in a healthier choice compared to many modern alternatives.

The paints Mike Wye supply are virtually free from VOCs (Volatile Organic Compounds). VOCs have been shown to trigger asthma attacks, eye irritation, nausea, dizziness and other symptoms. Choosing a paint that is almost zero VOC is important if you or members of your family suffer from asthma or have allergies.
With no unpleasant smells during or after painting it means your room can return to normal straight away. Therefore it’s perfect if you are sensitive to conventional paint fumes, are decorating rooms for little ones or looking for a safe paint.

Most of us have become used to buying paint ready made, off the shelf. Therefore it’s hard to imagine that up until the 20th century we could have been raiding our larders to concoct our own paints from a variety of household ingredients, including milk, eggs, beer, flour, vinegar and wine.
Some of these paints lasted 30 years or more, others didn’t last long at all. Most had the advantage of wearing away rather than flaking – so it was easy to clean and repaint the walls.

The important constituents of any paint are a ‘sticky’ medium to bind the pigments to the surface being painted, and a solvent which thins the binder allowing it to spread and dry into a surface film.
In the case of casein paint, the binder is casein (a milk protein) and the solvent is water.

A traditional recipe for casein paint is to add the curds from soured skimmed milk to water and pigments with an alkaline substance, such as lime putty, soda or ammonia, to dissolve the casein. Not adding an alkaline substance can result in a sludge which is difficult to paint with!

Nowadays, you can buy ready made casein paint in powdered form, to which you only need to add water and pigments. Apply with a brush or roller just as any modern paint.

Use casein paint for excellent breathability, good coverage most surfaces, takes pigments well and has an attractive soft, matt finish. However, it’s not advisable to use casein paint in humid or damp areas such as a bathroom, kitchen or basement.

While some types of natural paint have vanished without a trace others have survived from the earliest civilisations. Distemper paint has been used since ancient Egyptian times for wall painting, house decoration, the painting of theatrical scenery and occasionally for easel painting. In this country, it was still being used by local authorities to paint council houses in the 1970s.

Distemper is a water-based paint composed of pigments held together by glue. It has the advantage of being very cheap to make. There is no definitive formula and craftsmen would have had their own preferred list of ingredients. These were usually made on site and kept a trade secret.
In its most basic form, a ‘soft’ distemper is made from whiting, glue and water. This results in a soft, water-soluble paint. The whiting is crushed chalk which gives distemper its characteristic matt white appearance (it can also be coloured with pigments). The glue was commonly made from gelatin obtained by boiling animal bones, hooves or skin. However, other binders such as casein and gum Arabic were also used. The ratio of ingredients is also very important. Too much whiting and the paint will powder. Too much glue and the paint can crack.

Soft distemper was considered particularly suitable as a cheap option for painting ceilings. It is especially good for decorative plaster and mouldings as it could be washed off before repainting, avoiding a build-up of paint.
It is very difficult to over-paint sot distemper and people have been known to take the plaster off the walls to remove it!
A clue to whether you have soft distemper is if the coating rubs away with a wet cloth or finger.
An oil-bound distemper is not so easy to identify.

Traditional oil paint was first documented in the UK in the accounts for the upkeep of royal palaces dating back to the 12th century. However there is evidence that oil paint was used to coat surfaces long before that.

Not all oils are suitable for painting because they don’t all dry to a hard film in normal temperatures. Those that do are known as ‘drying oils’ and include linseed, walnut, sunflower and poppy. These absorb oxygen and form a solid elastic, non-soluble film. Of these, linseed oil from the flax plant is probably the most commonly used because it’s durable, flows well and has a good sheen.

Because a thin layer of oil can take up to a month to completely harden, other substances such as lead were added to hasten the drying time. This is why traditional oil paints are often referred to as ‘lead paints’.
The manufacture and use of white and grey lead paint is now restricted as they are poisonous if inhaled or swallowed.

Oil paints were generally used on wood and on walls where a durable, hard-wearing paint was needed. It was common practice in some regions to oil brickwork as soon as it was built to preserve it.

Unlike modern synthetic paint which tend to disintegrate under UV light, traditional oil paints wear thin with age. They are vapour permeable and can generally accommodate movement meaning they are less prone to cracking.

There’s something deeply satisfying about applying a coat of oil to a parched and greying piece of wooden furniture and buffing it back to life with a soft sheen.

Oil is easy to apply, it fills open pores in wood and stops anything else getting in. It also reduces splitting of the wood and excessive drying out.
It hardens into a durable skin that is heat, alcohol and water resistant, and easy to re-apply.

Despite its tendency to yellow over time, linseed is probably the most popular oil because it’s easily absorbed, is durable and has a good sheen. It is sometimes combined with tung oil which is highly resistant to water.

Use oil as a deep penetrating primer for other surface treatments. Apply to stone, terracotta, cork and even concrete to give added protection and an enhance finish.

Wax is another traditional treatment for wood. Use as a finishing coat on top of oils, paints and plasters. It’s not as durable or resistant to heat and water as oil, but it’s just as easy to apply and renew.
You can also use wax in solution to clean existing waxed surfaces.

There are a variety of waxes available from a some unexpected sources. However, beeswax was generally the commonest traditional treatment for wood. Beeswax is very soft and inclined to smear. It is sometimes strengthened with carnauba wax, from Brazilian palm fronds, which is hard and brittle.
Beeswax thinned with turpentine is a well tried recipe with the added advantage that wood-boring insects dislike them both.